For the purposes of this article, I’ve been playing a lot of Symmetra, Overwatch’s least-played character. I’ve come to a couple of important conclusions about her.

I hope i’m not leaving anyone behind when I say that gameplay should be at least one of those things.

MasterOverwatch‘s hero comparison – the most direct comparison and dataset on Overwatch’s heroes available – shows strange figures that seem to contradict this. She’s least played, and 15th (out of 21) for score, but takes the #1 spot for “win percentage” – 62% of teams with her on have won their games. This suggests that she should be one of the more effective classes, yes, but there’s a few alternative explanations for this:

Anecdotally – and i’m the pubbiest pub player there is – there’s a sense of a collective groan when someone picks Symmetra. She’s a Support class, so competing directly with Lucio and Mercy, both high-tier characters, and Zenyatta, who much more reliably doles out buffs and debuffs. I’m a half-decent player (my own win rate is above 50% with my most played classes, but only 36% with Symmetra) so I like to think it’s not just that i’m incompetent.

So, what makes her bad and not fun to play? A brief summary of her abilities – she can give shields to allies, build small short-range turrets, and her Ultimate builds a teleporter from spawn with six uses. This doesn’t really work because:

So how does one fix Symmetra? What changes can be made to make her viable on defence and attack, stand out from the other classes, and to be more enjoyable to play? There’s a few ways of thinking about this.

Numerical fixes: The easiest and worst way. I’m sure that one could make her more effective simply by tweaking numbers – if her turrets were faster to deploy, and did more damage, she could use them in combat much more effectively. This would make her standard defence strategy of “three turrets on a corner” more effective too, which wouldn’t be terribly fun – but it would allow that strategy to be shaken up a bit.

Some Kind Of Reshuffle: Her teleporter is her most useful ability. Lets rearrange her powers to put that in one of her two primary slots- probably with limits like a slow cooldown – and move either her shields or her turrets to the Ultimate slot. Shields as an ultimate is exactly what Lucio does, so lets not do that. Instead, what about her turrets?

Perhaps her Ult allows her to place, say, ten small turrets – less damage, slightly smaller range, but instant-build (they build as soon as they hit, firing at about the speed Zenyatta shoots) and about as much stamina. It’s useful defensively – set up those turrets on or around the point very quickly – and offensively – cover an enemy defensive position with mini-turrets, and force them to waste time smashing them or take bee-sting damage. You can spread them around a wide area, or just plonk them all down in one point to create a small bubble of high damage. It synchs well with Zarya and Mei, balances out Lucio, and acts as a pretty good counter to Reinhardt in general. 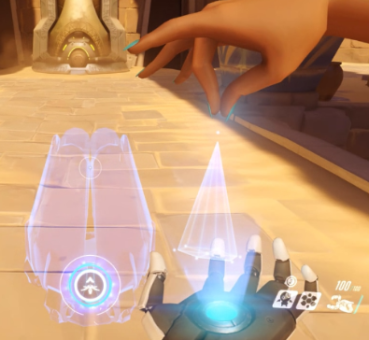 She’s The One With The Teleporter: This takes the reshuffle idea further: her teleporter is what makes her unique. Lets put the teleporter front and centre, and build the rest of her abilities around that. How can a teleporter be a viable main-slot power? Perhaps if it had fewer uses – three, say – and recharged more quickly. Rather than retreating from the fight to hide her teleporter and spend more time defending it, she chucks it down more or less immediately where she is, and then a minute later is ready to do so again for the next few players. This is useful either on defence or attack. She isn’t – and shouldn’t be – much of a roamer, so typically wherever she is at the time is a good place to go. The fast turnover makes the death of the teleporter less of a big deal, and means it should always be somewhere relevant.

What other abilities can we give her to synch with that? We want to encourage her team to help defend the teleporter – perhaps it hands out buffs as well? Some small puddle of healing, or perhaps a passive version of her current shields? (Her shielding could be passive very easily, allowing her a whole extra ability.) An alternative might be to make the teleporter also act as a dispenser to nearby teammates, meaning that her role is to keep moving the teleporter around the battlefield – moving it up for best efficiency on attack, moving it around so it can’t be hunted down on defence.

If the “Dispenser” heals (and the way Overwatch’s ammunition works, i’m not sure what else it could do – armour? damage buffs?) she could be a very viable support – a static but tougher Lucio, plus the teleportation.

Back To Basics: Let me quote her official hero biography.

Symmetra literally bends reality. By manipulating hard-light constructs, she crafts the world as she wishes it to be, in hopes of engineering a perfect society.

She’s a builder. She makes things out of light. This is, to me, an incredibly evocative image that her current powerset simply doesn’t live up to. The fiddly turrets and teleporter could be made out of anything: “made out of light” sounds like such a fantastic sentence to design game mechanics around, it’s a real disappointment that we’ve ended up with “a laser gun”. The background or “fluff” should always come after the mechanics of design, but for situations where the theme (“made of light”) and purpose (“usefully support a team”) are both clear, using the fluff to inform the mechanics can lead to brilliant, naturalistic results. (Think how well Lucio is themed around music and buffs, or Mei around ice and being fucking annoying.) I shan’t try and be too specific here, but starting from the theme and purpose above, here are some ideas:

If you were hoping a final set of conclusions from this, i’m sorry to disappoint you: I wouldn’t want to draw definite suggestions without more data. Perhaps everyone I haven’t spoken to loves Symmetra, and i’m an idiot. I hope not: this is a lot of words to write to just be wrong.

In conclusion, here’s a video of someone getting Play Of The Game as her without even seeing an enemy. I think we all owe Torbjorn an apology.