The last post i’ll make about Neon Arena for the present: my thinking on the level design.

In some ways I can just rip off Mirror’s Edge etc for Neon Arena, but the difference is in the name: it’s an Arena. Mirror’s Edge is fundamentally linear: not a direct narrow path, but with a few alternate routes that can be taken: on a very basic level, Mirror’s Edge levels look like this:

(Catalyst is an open-world game: on a macroscale you can go anywhere, but honestly, the minute-to-minute gameplay looks exactly like the above. The only difference is that most routes now need to be possible to traverse in both directions.)

Neon Arena is an arena: it’s a big(ish) open space, and the way the beacons are set up, you need to be able to fairly freely move around in it as you wish. You don’t need to travel in either direction along each route, but you do need to be able to get to and from every location. A basic diagram of the routes might look like this: 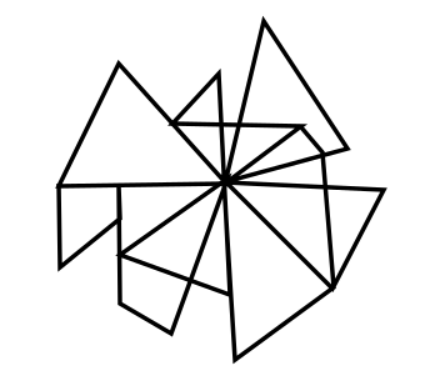 To design the level, I decided to keep taking inspiration from the Mirror’s Edge games, but to return to first principles. What’s fun in Mirror’s Edge? Flow and Tricks.

Mostly, it’s fun to get into the groove, to put your head down and run, and to keep moving smoothly. They can jump, run, slide, roll: but mostly they keep the momentum and keep moving forward, without any real challenge. This should be the player’s default state of action: when moving from A to B they should be “flowing”.

In terms of design, this means spacing jumps out enough to allow players to stay at full speed in between them, limit sharp turns where possible, and use the tricks from the previous post to make players understand as clearly as possible which direction they should go, without needing to consciously think about it.

Tricks are fun! The wallbounce, climbing, sliding – it’s small things, but pulling them off correctly makes players feel good. As such, the levels should be seeded with places to perform these tricks.

In the picture to the right, there’s two sources of fun: the intellectual challenge of identifying the route to the top (only the first few times) and the satisfaction of correctly pulling it off – the jump-climb-jump isn’t particularly tricky, but is enjoyable to do.

Of course, they have to work together – the flow of the level needs to be maintained, even while the player is doing whatever trick they want.

To an extent, the macroscopic layout of the level doesn’t matter (although I’m drawing the conclusion that of the two levels made, the circular one works broadly better than the long thin one: The maximum possible distance between two points in a circle is much smaller than that for a rectangle of similar area. (Or so it certainly seems, I haven’t run the maths.)

So, that’s what the game gets from Mirror’s Edge. What does it need itself?

Combat in the Mirror’s Edge games tends to take place in purpose-built areas. However, in Neon Arena the player can run into a drone at any time. At the moment, the only “combat” in the game is about avoiding drones, but later on the player will be able to ambush and attack drones, and I wanted to build levels that would facilitate that. What that needed was:

With these principles in mind, I built two levels for Neon Arena. One is circular, based around a small council estate and storm drain. The other is longer and thinner, an urban waterfront. It’s based on the South Bank in London, with a certain amount of artistic license. There are more pictures below, these ones not specifically chosen to highlight the underlying layout. Which is good, because it means they’re prettier.